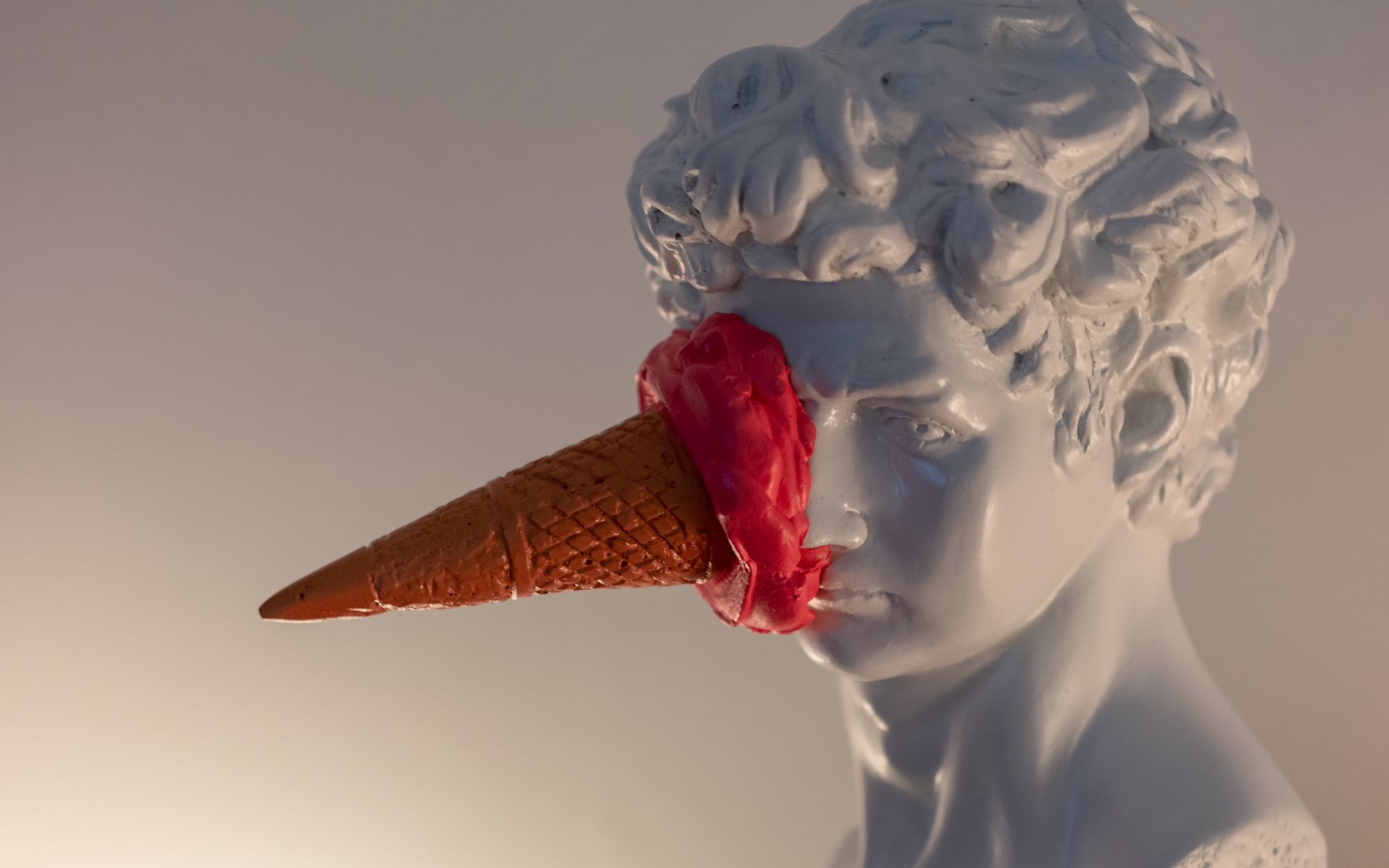 Photo by the blowup

A Pragmatic's Guide to NFTs

If you’re a creative—an artist whose work can easily be digitized—there is a high chance that you’ve come across someone telling you that minting NFTs is a good idea. With so much culture surrounding NFTs and NFT guides being flung at you from seemingly every corner, it can seem like everyone is hopping on this trend. Your jaw has likely dropped when you heard about Beeple selling an NFT for a whopping $69 million, leaving you wondering if you can/should get in on this whole thing. Is it worth it? How much money can you make, if any? Should you be worried about the environmental impact? Questions sure are aplenty but don’t you worry, we weren’t planning to leave you lost at OpenSea.

In this article, we delve deep into the Internet’s new status symbols by looking closely at their impact and get-rich-quick appeal. What are NFTs? What do NFTs Stand For (In Theory and Environmental Practice)?

A piece of artwork stamped with a unique stright of code stored on a blockchain is known as a non-fungible token; NFT for short. Shaped by viral marketing, interest in the world of NFT has exploded over the last year, driving up the price tag of digital artwork to near-fantastical levels. But the blockchain technology (the same technology which also forms the basis of cryptocurrencies like Bitcoin), comes with its fair share of greenhouse gas emissions.

So what does this mean? How does photography transform into NFT photography, for instance? In a nutshell, when an artist uploads a piece of art and ‘mints’ it, a process known as mining starts taking place; this process is a complex puzzle of computing power and loads upon loads of energy. According to estimates, the creation of an average NFT has a stunning environmental footprint of over 200 kilograms of planet-warming carbon, equivalent to driving 500 miles in a typical gasoline-powered American car.

In the environmental sense, NFTs have been particularly controversial, because the hype over digital tokens is not completely unfounded. In fact, NFTs are often seen as a long-awaited shot for many smaller-scale artists to finally garner more recognition, since there isn’t any kind of need to latch on to commercial galleries or networks of art buyers.

Joanie Lemercier, a French artist recognized for his futuristic light sculptures, has also dug into NFT’s environmental impact; only this time, after having released them. He released six tokenized videos that drew inspiration from platonic solids, all of which got snapped up by buyers. After learning about the growing alarm over NFTs’ energy use, Lemercier, who’s been heavily involved in climate activism, decided to investigate. Turns out, the release of his six crypto artworks consumed more electricity than his entire studio did in 2 years.

How Minting NFTs Effects the Environment

Upon learning about nonfungible tokens, Austrian architect and artist Chris Precht was initially captivated. These digital collectibles were taking the world by storm, and Precht, being creative that he was, couldn’t help but explore the now-nonfungible options he had to grow as a professional. However, there was another side to Precht, a side that earned him fame in the world of ecological architecture. Learning about the mind-boggling environmental footprint of NFTs was enough for him to swear off the idea, despite the sky-high sums he was witnessing.

By Precht’s own calculations, creating the 300 items of digital art he’d planned to sell (100 each of three art pieces), would have burned through the same amount of electricity an average European would otherwise in two decades. What in the (not-so-green) world? How Does the NFT World Work on Solving these Issues?

It should be noted that Ethereum has mentioned a roadmap to reducing its footprint by moving toward a different model called “proof of stake” as opposed to the “proof of work” model used currently. The latter has miners competing to add an asset to the blockchain’s master ledger by solving a cryptographic puzzle. The miner who arrives at the right answer first is the winner and gets his or her asset added to the blockchain. However, with so many computers rapidly generating numbers in a frenzied trial and error race, 2021 stats show that there have been 170 quintillion (1 followed by 18 zeros) attempts recorded per second to produce new blocks. And while this system has been intentionally designed to be competitive, the environmental tolls simply cannot be ignored.

Alternatively, the “proof of stake” method does not require miners to compete for assets in the blockchain. The new model instead rewards participants based on how much cryptocurrency they already own—this cuts down on the computational work, and, by extension, emissions tremendously. Some smaller NFT platforms like Hic Et Nunc (based on the Tezos blockchain) have already started using this method, attracting floods of eco-conscious artists including Joanie Lemercier.

What Makes NFTs So Special?

An NFT says that one specific copy of your digital media, the one listed in the NFT's metadata, is essentially the one that matters. This means, you could literally have millions of copies of a GIF you made floating around the web, but the owner of said crypto art only cares about the "official" copy linked to the NFT.

If the idea of paying $69 million for something anyone can see online seems strange to you, you are certainly not alone. Some collectors and people in the traditional art world have questioned the idea of exclusivity that NFTs have come to represent.

Peter Kraus and his wife Jill are avid collectors and trustees of New York's Museum of Modern Art. Their collection includes one of the six existing versions of Christian Marclay's The Clock; a 24-hour-long video collage consisting of a thousand clips from movies throughout history. According to the Krauses, scarcity is about "owing something that you think is beautiful and can't be seen in anybody else's house. With NFTs, however, a purchaser can recieve a digital receipt called a token, but the rest of the world can still look.

Curiously though, a lot of artists do not share these concerns. Rafaël Rozendaal, a Dutch-Brazilian visual artist who started his career in the early 2000s by turning websites into art objects and selling their domain names, sees NFTs as a surefire next step. The artist links non-fungible tokens’ appeal to their digital permanence. No longer is there a need for digital artists to worry about server maintenance and domain access. Within only a few minutes, he can mint an NFT and know for certain, that his art won’t ever become obsolete. How Possible is it to Sell an NFT at a Huge Price?

It's easy to get caught up in the ongoing frenzy surrounding sales of art-related NFTs, especially when learning of their potential to be empowering for artists that are otherwise shut out of the system. But, realistically, most sales (that manage to occur) are actually $2000 or less. And while there isn't a comprehensive data source covering the entire market, Cryptoart.io comes pretty close:

These numbers might not be complete, but they should give you enough insight on how to price an NFT, how to do it realistically, and whether it’s worth doing it at all.

What to Do if You Failed to Sell NFTs?

Armed with the important albeit a little disappointing knowledge that an "average" artist probably will not be making thousands of dollars per sale, you can now start thinking of alternatives. After all, having your work recognized and sold online is not and never has been limited to non-fungible tokens.

In a shameless act of self-promo, we advise you to look into the world of stock photography, videography, and graphic art. You can look into how to sell prints if you do photography, or how to find a home for your illustrations. You can look into all the stock content marketplaces the world has to offer like Shutterstock, Adobe Stock, Alamy, and more to find a good fit for your content. And while these marketplaces offer more modest paychecks when compared to NFTs, they’ve definitely earned a much more stable reputation over the years.

Alternatively, if you do not feel like making a separate account on each and every marketplace, you can always sell photos online with Wirestock.

A Pragmatic's Guide to NFTs